Recently I was visiting my brother-in-law, Bill, who is in a very nice Senior Citizen Center in a town about 40 miles from where I live. I found him dozing in his recliner, but he sat up immediately when I walked in and greeted him.
"Hi, Bill, how are you doing? You are looking great!" He looked up with a quick smile as his eyes lit up.
"Well, here I am, ninety seven tomorrow." He said, shaking his head slightly as he pushed a wheelchair aside."Last of the Herman's. We two, are the last of this generation, all of them gone now. Everyone except you and me." He nodded, as he rubbed his right knee.
"All the Herman's?" I asked. "How about in-laws, or your step-brother, Walter?"
"No one left but you and me. Now it's all up to our children, grand-children and their generation. How old are you now?" He squinted at me as he offered me a piece of candy.
"I'll be ninety three in May." I smiled, and unwrapped the mint.
"You come by yourself? You still drive?" I nodded and popped the candy in my mouth.
"Good for you!" Bill slapped his left hand on the arm of his chair.
We chatted and he brought up a few WWII memories. Since I had shared before how his brother, Del, had proposed at a second USO dance and I accepted, the family had been curious how we managed to communicate. "Love, love, love." I'd laugh.
Bill cocked his head at me and chuckled."I still remember when I first met you. We brothers;George, Clyde and I were on a short furlough when WWII ended, but Del was still stuck in Iceland. You didn't speak any English."
"Wait a minute!" I interrupted."I could say Coca-cola, yes, no, dance..." (Now when I think back...we were all a little crazy, especially me, or is it I ?! )
He laughed. "But it didn't take you very long to learn, Clyde teased the daylights out of you and you tried to come back at him!" He laughed again. "But George and I helped you out!" We both grinned.
Then Bill shared with me how he and Ann got married eight days before Pearl Harbor. Like his brothers he enlisted, leaving his new bride. Del fudged about his age to get in. He was a few months to young, only seventeen.
As I drove back home I thought back on our conversation: What an ordeal for Mary, their mother; her four boys in a dreaded world war. (And how in the world was she going to speak to her youngest son's bride, who spoke no English and she, Mary, spoke no Icelandic!)

But then I remembered that she was a fierce prayer warrior. Her boys came home safe and she and I got along famously :-)

I am frequently asked "How do you do it? What's the secret to you energy?"

I really don't know if this answers the questions: I never stopped moving; from raising 10 kids and sometimes other folks's kids as my husband and I were in the Ministry from age 26 to always :-)

Del, my husband of 70 years (he went "home" 2015), felt a calling to start new churches - at times that meant we literally built from ground up other times it was remodeling, adding to present building.  Cleaning, decorating and so on. This meant of course that while he was preparing the message, or was in the pulpit,  I was the "chief cook and bottle washer" Sunday-school teacher, Children's church etc.

When organizations officials decided to replace older pastors with younger ones, my husband started "flipping" houses. Since I already had a Interior Design/Custom Drapery shop my expertise came in handy.
All this decorating, painting, cleaning meant "movement" and "work-out"! 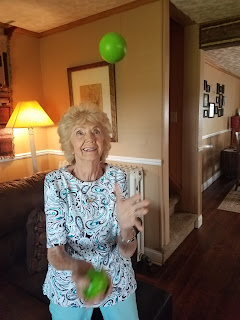 But just because, at 93 (next month), I don't do the physical labor like I used to I have not stopped moving;

My semi routine: Do 10 or more sit-ups before getting out of bed. Walk to a wall and facing it, stretch as high as I can both hands flat, fingers spread out, count to at least 20. While still facing the wall I do my ham-stretches... by the way I do stretches throughout the day, even in the car.

Next I go into the kitchen and while the coffee is perking and the microwave oven  is cooking my oatmeal I do my "Microwave Hop" ...That is; jump, dance and shake it all around!

I have found that juggling rubber balls are great for my co-ordination :-) Try it, you might like it!

There's a great feeling of freedom in "YES I CAN DO IT."

APPRECIATION FOR MY FEET. (And the whole body )


My husband and I moved at least 29 times over the years. From Central Illinois to California and back to Illinois. Each time we bought a place it was improved, "fixed, up-dated, painted..." Several times I have heard the same story from others "we like this house but want to update the kitchen...the bathroom..." We tend to the new house with care, anything goes wrong we fix or call the experts. The yard is mowed, flowers and trees are planted... And then we move (various reasons) and start all over...

I got to thinking about the one "house" we live in, from the time we are born until the end of life. It's the only "house" each of us will ever have that we can't move out of for another. Are we as careful in taking care of this "house"? Do we make sure that all the moving parts are well maintained? Or do we let it lapse into disrepair?

I guess I'm a non-stop exerciser; I do exercises while in bed, then when I get up out of bed I stretch like our dogs do! Do the microwave hop-dance-jump as the oatmeal cooks.

Recently I had my first pedicure, at almost 93 years of chronologically gifted years (with ten kids to raise I sure didn't have time for pedicure!) While the attendant was massaging my feet I thought about how I've gone to a beauty-shop and got my hair done, got manicure for my  fingernails, massage for back and shoulders. Gone to exercise; walking the dogs, walking on the track or treadmill! But seldom considered these poor feet! They have lugged me around to all the above mentioned places. Walked over the lava-terrain of Iceland to every State in the United States plus, Canada, Mexico and Haiti

I reached down, (btw a very good stretch exercise) and silently patted my feet and promised to take better care of them and pamper them now and then. :-)
Posted by vikingamma at 2:05 PM 2 comments: 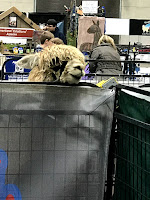 Chris (one of my seven daughters) drove down from Chicago to go to the Alpaca show here in Peoria, Illinois.Her daughter, Tashia owns Butterfield Alpaca Ranch in Nebraska and has 33 Alpacas, gorgeous creatures :-) We sure enjoyed it even though we just about froze, seems like the animals get to warm in their luscious warm fur and have to be kept cool. Even hosed down at times- check out Tashia's Spraying Down Alpacas on YouTube. 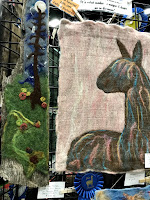 As we meandered through the vendors booths, I had a fun encounter with a Alpaca owner from Maryland. After learning that my accent was from being an Icelander he told me a friend of his was going there this summer. He was so excited and asked many questions so he could share with his friend...Do you really believe in the people that live in the rocks?...That kind of question always gets a non-committal smile from me! 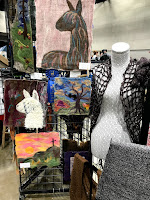 Later, a lady vendor asked the same question - about the accent that is - I really was stunned to hear her say she had never heard of a country named Iceland! Had no idea where it was at.

I thought about that,  when couple of days later someone asked me what it was like for me to come here by myself - my American husband was in the Navy, and had to stay behind - not knowing anyone, and speaking just a handful of broken English. But I was thinking what was it like for my mother-in-law? She, who had never been to New York had to take a train and meet a young woman from a country she knew nothing about - was she thinking her son must be crazy ? Had her daughter-in-law lived in an Igloo? Was she wondering :How do I talk to her, I don't know her language!

I quickly found out that living among English speaking folks, having zero opportunities to speak Icelandic, I picked up the language fairly well, although it took a few years to get  pronunciation of certain words; it took a long time for my husband to understand my "cattastrop" but when I said some thing was a "terrible cattastrop!" He very gently explained "that is pronounced catastrophe."  I had a time accepting that since there was no "fee" in the word.

It's been many years now, Iceland is getting to be one of the hottest tourist-must-see destinations and I run into more people that tell me that "it's on my bucket list" rather than the blank look I used to get when I first got here in June, 1945, and the above-mentioned lady that had never heard of a country called Iceland.
Hmm...Erik "The Red" an Icelander, discovered America 500 years before Columbus, just saying!

Posted by vikingamma at 2:20 PM No comments: