Father's Day...Bittersweet memories of the father of my ten wonderful kids. Del and I had been married almost 70 years when he went to his heavenly home last February 26th. He had preached about that home for over 50 years, having been a Pastor/builder of  several churches in Central Illinois.

I started reminiscing about the war years and wondered about other "war brides." I would like to be able to get in touch with some of them and know their stories and how it was for them to adapt to a totally different environment.

We met in Iceland in 1944 during WWII, he was in the United States Navy. I had been asked my couple of girlfriends to go to a USO dance. This handsome Sailor, with a big smile, came up to me.
"Dance?" He said something else that I didn't understand. I shook my head. He said "please"? Something about that plea and his soft hazel eyes made my  heart do a flip-flop. These were difficult times, no one knew who would come back when sent on a mission; ships were torpedoed, airplanes were shot down and many service men were losing their lives.
"Okay." I knew that word; it was as universal as "Coca-Cola." As we danced that evening it was like we'd been hit by a bolt of lightening! No need for words just looks and - for me anyway - silly smiles.
We met again at the dance hall the next evening, and as we danced he asked me to marry him. I looked at him, thinking I knew what he was asking, but not quite sure. Del asked again, taking my left hand and acting like he was putting a ring on my finger. Then I knew, and said "yes." We were serious! The next day we told Mother.
"YOU WANT TO DO WHAT" My soft-spoken, easy going, Mother shouted!This was not good. My Mother never raised her voice; not at us kids, not at my Father, no one. And now she had really raised her voice!
"Herman and I want to get married. " I repeated. (Later, in my family Del was always called Hermann.)
Mother had her face buried in both hands, rocking from side to side.She was quiet for a moment then she looked up, wide-eyed shock still on her face.
'' Íedamín, will Herman live in Iceland? Or, heaven forbid are you going to move to Amerika? Do you realize how far it is? We don´t know anything about is family. We don't even know what part of the country he is from. It´s a huge country. You could get lost, then what?´´ Mother nervously twisted her fingers, then dabbed at her eyes with a hankie.
Del had been holding my hand and trying to follow a conversation he couldn´t understand.He didn´t speak Icelandic and my Mother didn´t speak English.My English was not a whole lot better; we got by with hugging, kissing and holding hands! Del squeezed my hand. He could see that this wasn't going as well as we had hoped.
I said something like, "You home Amerika?" He looked at me a little puzzled. I tried again. "You Mamma, home, Amerika?"
Del smiled that great smile of his and said "Chicago."
Mother about fell off the sofa, gasping. "Chi-ka-ga? Gangstar Chi-ka-ga?!?"  It didn't come out "gangster" but close enough. We had some explaining to do and it wasn't going to be easy!
There had been a ban of marriages between U.S. Service men and Icelandic women but Del tackled the powers that be, wearing down layers of authorities by unwavering persistence got the ban lifted and was the first U.S. Serviceman to marry after.
Eventually, my parents accepted the situation and we were married March 25th. 1945 in the Dómkirkjan, Reykjavik
As time went on I learned more English words and tried to teach Del Icelandic, without much success. We took walks hand in hand around the lake in the center of downtown Reykjavik. Del would point and say "water" I´d say "vatn". He would say "birds" I´d say "fuglar". Although he couldn´t get THOSE pronunciations he did quite well with the words "Elska mín", translated "My love".
Coming from totally different worlds as we did, I did have fleeting doubt, and then pushed it away, I was in love.

From my Memoir GROWING UP VIKING, Fond Memories of Iceland..

Posted by vikingamma at 7:40 PM No comments:

Iceland is an island only 39,769 square miles (about the same size as the country of Portugal or the US State of Kentucky), but has about 30 active volcanoes. One of the  most recent ones erupted in '63, spewed right up from the ocean floor and became an island.  It was aptly named Surtsey - after the fire giant Surtur.  In  '73,  just  stone-throw away, on the island of Vestmannaeyar, the town of Heimaey got a rude awakening in the middle of the night.  Right in the middle of town, a volcano erupted and created the newest mountain on Earth. They named it Eldfell.
In the Spring of 2010 Eyjafjallajökull erupted and, due to plumes of volcanic ash, caused airplanes to be grounded in 18 countries and more than 100,000 travellers affected for over a week.
And I must mention Bárðabúnga that erupted in August just three weeks after we left Iceland last year and kept belching up lava for several months. Earthquakes and tremors were not uncommon.

So, in this kind of surrealistic surroundings was I brought up...

Following is from my memoir, Trolls - Monster Worm - Hidden People...

"Hey look, Lilla, if we put flower sack over our arms we could fly just like those gulls up there." I squinted  my eyes to watch one bird standing on a large lava rock. I stomped my foot to see how he'd take off; spreading his wings wide he glided up into the air, feet tucked under his body. Gracefully swooping in a curve, he came for a landing on another rock a stone-throw away. I could see his webbed, yellow feet come down straight and watched as he hopped a bit before settling down.
"Did you see that? We can do that!" I hollered. "See? When we get on top of that shed, we'll put the sacks on our arms, spread our them out like wings and when we jump, pull up our knees and fly from one roof to the other. Come on, Lilla. Grandpa and Sisi will be here later. Let;s show them how we do this!"
I was already climbing on top of one of the sheds.
"No, no, come on down. The roof is shaking!" Lilla shrieked as small rocks began to rain down the cliff at the back of the sheds. I could feel the shed swaying and hear the clattering noise as the rocks pelted the corrugated sides. Frantically,  I scrambled down yelling, "Run Lilla, run, it's an earthquake, the trölls will be coming!'' Then both of us were running oddly,  like we were on the deck of a ship in a stormy gale. Reeling and weaving, we screamed hysterically "The trölls are coming, the trölls are coming!''
Posted by vikingamma at 6:53 PM No comments:

Kindle Format On Sale! Just 99¢ for a LIMITED TIME 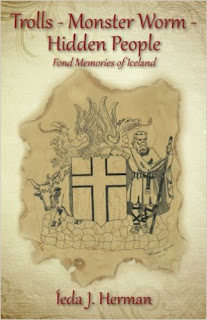 I am very excited about my newest work in progress, The Silver Arrow.  This is a young adult adventure story based in Iceland with a science fiction twist.  My characters go on a quest that leads them into a surprising world that includes Odin and some other well-known Norse gods.  I'm expecting this new story to be available sometime later this Summer or Early Fall.

In the meantime, am really looking forward to returning home to Iceland again this summer. I so enjoy re-living the memories of growing up in such a fantastic place.  I shared many recollections in my memoirs, but every year I find I remember more escapades of my childhood in this amazing and uniquely mysterious country, often called the Land of Fire and Ice.

To celebrate another year of adventure, I am offering a special .99 price for the Kindle version of my memoirs, Trolls-Monster Worm-Hidden People: Fond Memories of Iceland.  I will only be able to offer this for a limited time, so please head to Amazon (click here) and download a copy today.

Posted by vikingamma at 5:00 AM No comments: