A FEW PHOTO COLLECTIONS OF A NONAGENARIAN... 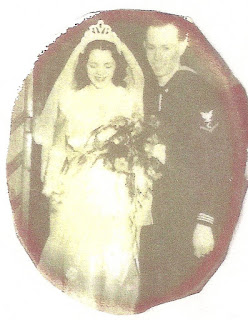 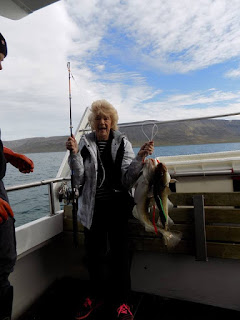 THIS IS WHAT STARTED IT ALL! A MARRIAGE IN THE DÓMKIRKJAN IN REYKJAVIK, MARCH 25, 1945.


3 BIG FISH ON ONE LINE, NOT BAD :-) IN SKAGAFJÖRÐUR, ICELAND 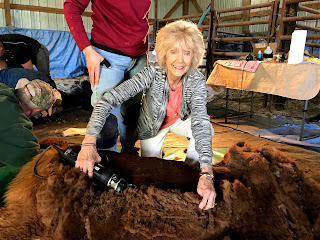 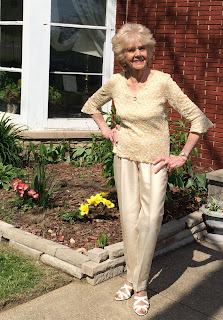 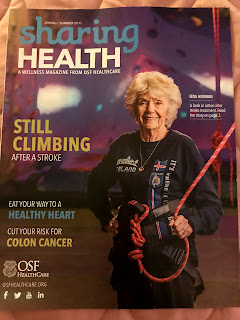 I KNOW MY BODY...WHEN THE KITCHEN STARTED SPINNING I TOOK BABY ASPIRIN AND CALLED FOR HELP RIGHT AWAY...MY TWO SISTERS SAID THEY WOULD HAVE GONE BACK TO BED UNTIL THEY FELT BETTER.

WRONG THING TO DO - MINUTES DO COUNT! 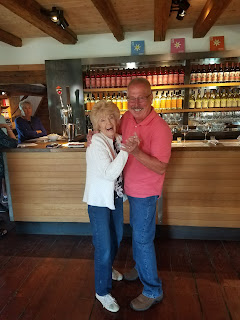 IMPROMPTU DANCE WITH A STRANGER IN  A WINERY IN VERMONT, WHERE HEIDI, MY YOUNGEST CHILD, AND I WERE TRAVELING THROUGH.

WHEN I HAD THE STROKE THE DOCTOR AT THE E.R. TOLD ME THAT DRINKING A GLASS OF RED WINE AT NIGHT WAS VERY BENEFICIAL FOR LOWERING MY BLOOD PRESSURE. SO WE STOPPED TO CHECK IT OUT. FUN! 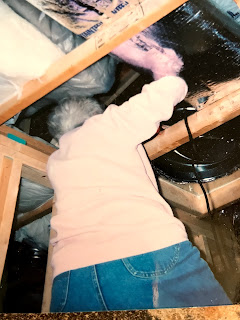 BESIDES PAINTING AND "DOLLING" UP A GOOD HOUSE HAS GOOD INSULATION, WE MADE SURE OF THAT. 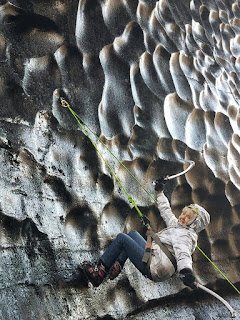 THE LADDER WORK PREPARED ME WHEN ANOTHER DREAM CAME TRUE IN JUNE OF 2018...FIRST WAS PARAGLIDING, THEN ONTO ZIP-LINING AND THEN THE DREAM   HIKING TO KATLA GLACIER ICE CAVE AND TRY ICE CAVE CLIMBING!!! WOW! NEVER, EVER GIVE UP ON YOUR DREAMS.

"LUCK" IS PREPARATION MEETING AN OPPORTUNITY...

MY FATHER JONAS, A MAN WHO LOVED THE SEA..


There were two men who inspired me to live life to the fullest and not be afraid of venture, wherever it might take me, my grandpa (Afi) Bjorn and my Father (Pabbi) Jonas.

My father, Jónas Björnsson was born at Hámundarstaðir, Vopnafjörður, Iceland on June 13th 1887. He was the oldest of three siblings... Páll Helgi, a sister, Þórbjörg and a half-brother, Hámundur (Bjössi).

Grandpa Björn -Afi- raised his children (and me) with the saying ''old enough to hold your fork and eat, old enough to work, plenty to do around here", also, "Viking kids don´t cry!'' He combined farming and fishing, splitting his time between sea and land.

Father did not care for farm life, instead his love for the ocean was evident early in his life when he was able to swap chores with his brothers who liked farming better than fishing. He left home at age 18 and went to Reykjavik, the capital of Iceland, there he entered the Navigation School of Reykjavik. Graduating in the spring of 1924. After he and my mother married and had five children, he was pretty much gone fishing and we didn't see much of him. As the war raged on during WWII  we were in constant worry as he sailed across the Atlantic to England.

Of us five kids - three daughters the two sons - I was most like him and tried to imitate his mannerism. Even to the rolling gate of the seafaring man, much to the merriment of my siblings who would laugh, then imitate me imitating Father.

I was a married and living in America when I found out that my Father was quite the poet who jotted down lyrics at every opportunity; to quote a friend of his, Ragnar Eliasson, on my Father's 80th Birthday :"Jonas is a quiet man by nature but funny and happy in the company of his friends...Not a few are all the poems and verses this friend of mine has uttered at various moments..."
I now have a few of his writings that I hope to be able to translate and publish...no problem for me to do that for my Icelandic friends and family!

The photo below is of trawler ICELAND II (Father in white shirt in center) that foundered off of Nova Scotia in a brutal winter storm in 1967 - all ten men perished. My Father was in Iceland at the time, but I didn't know that when I picked up our local newspaper -The Daily Pantagraph, in Bloomington, Illinois - and below photo was on front page as A.P. news.

It was one of my, few, awful times... so far away and communication at that time was really bad, it took all day for a phone call  from the U.S. that had to go through London, England, to reach Reykjavik, Iceland, where my family lived. 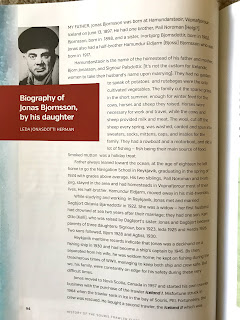 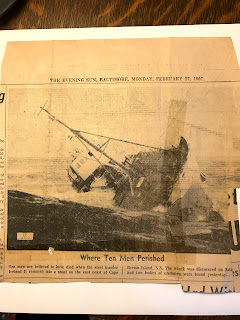 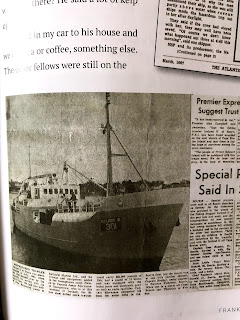 Posted by vikingamma at 6:05 PM No comments:

Thank you, Garðar for this info:

Oldest steel vessel in Iceland, Ieda Herman...your dad, Jónas Björnsson  told me be had been captain on this vessel at one time, don´t remember the year or her name then, must of been between WWII and his move to fishing in PEI, Canada.

Garðar BA 64 is thought to be the oldest steel ship in Iceland, built in Norway as a whaling vessel over one hundred years ago. It was launched in Norway in 1912, the year the Titanic sank in the North Atlantic Ocean. It was named Globe IV and was equipped with both sails and a steam engine to use when the weather was still. It was specially reinforced to endure the harsh conditions of the Southern Ocean where it was used to hunt whales.

Globe IV was sold to the Faroe Islands in 1936 where it got a brand-new name and a somewhat less dignified role in the whale-hunting business. At the end of the second world war the ship was sold once again. This time to Iceland. Once here it was given an Icelandic name, Siglunes SI 89, and the old steam workhorse which has powered it all those years was replaced with a 378 hp Ruston Hornsby diesel engine. The ship traded owners and names for number of years until 1963 it finally acquired the name it has today, Garðar. It was a good ship and served many owners well for a long time.

In December 1981 Garðar BA 64 was deemed unfit for duty. Instead of sinking it at sea as was the custom in those days when ships went out of serice it was rammed ashore at Skápadalur Valley in Patreksfjörður. Today Garðar awaits its inevitable rusty fate in the sand providing tourists with a spectacular scene and just the perfect photo opportunity.

Definitely on my bucket list for a photo op next time I visit my homeland!

Posted by vikingamma at 6:01 PM No comments:


Anyone who knows me hears me constantly say "keep moving!"


A few years back my husband and I were traveling from Illinois to Duluth Minnesota. We left quite late as I had to finish installing custom draperies for a customer of mine. My husband drove all the way to just north of Eau Claire, Wisconsin where I took over the driving. About forty minutes later I went to sleep at the wheel and went into the median ditch. We were airborne over a culvert and stopped on the other side, After a stunned moment I opened my door to get out - My husband groaned "don't move, you may have broken bones!" I mumbled back "gotta move, gotta move!." By then people had stopped and told me to stop trying to walk, as I was hunched over the hood of the car trying to move.
Ambulance came shortly and we were taken to the hospital in Eau Claire, then by helicopter to Milwaukee. My husband had a broken back and bruises and I had less serious but painful broken ribs, cracked collar bone and bruised sternum.

In just a few days  was able to get up and move around, after being taped up, - albeit painful breathing! - I was told that because I was in the habit of moving I had healed faster!

I honestly believe that my determination in always moving has kept me fit even into my nineties. I do my sit-ups before getting out of bed - then planks, cat and dog stretches, hamstring and a little hop. Even when traveling - which I do a lot of -  I like to do my "microwave hop" dance in the kitchen and "shake my body all about"!

It's so tempting to "take it easy" and become a couch potato and frankly get rusty, which reminds me... a  month ago I was in Winona, Minnesota. Driving by a farm and I saw what looked like rusted-out model T-Ford. The weeds had grown up all around it as it sat in the field. I kept driving and arrived into town. As I came to an intersection and slowed for a stop-light a Model T-Ford pulled up on its way to the Antique Car Show I knew was in town. Wow! It's body was impeccably painted shining sea-green, the white-wall tires were spotless white and gleaming chrome!
I am no antique car expert, but Model T-Fords are hard to miss, I couldn't help but to think: One car was at "rest" and rusting in the field, the other was oiled up, kept up and moving!

Lesson here? Don't let your body "rust up" it's the only one you'll have! 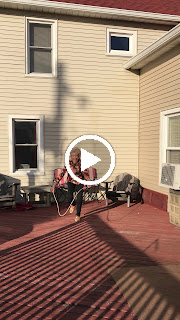 and still able to jump my rope...

There is an old rule in neuroscience that does not alter with age... use it or lose it...

Posted by vikingamma at 4:35 PM No comments: