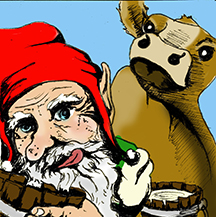 Read from the beginning at http://heidiherman.blogspot.com/2016/10/the-yule-lads-mayhem-at-north-pole-part.html

Posted by vikingamma at 6:06 PM No comments:

A Nazi’s Disappointment With Iceland

By Helgi Hrafn Guðmundsson (click to link to original article) 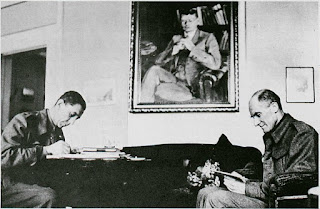 Iceland had been looked upon as a Germanic paradise of pure racial stock by the fanatical pseudo-intellectual circles inside the Nazi party in the 1930s. Heinrich Himmler, head of the SS and a leading party member, was very interested in mysticism and idolised the Vikings, who he thought were symbolic of the alleged racial superiority of the Nordic race. Dr. Bernard Kummel, a scholar close to Himmler, wrote a book on the ™spiritual treasures∫ of the Icelandic people and encouraged Germans to seek these in Iceland.
Dr. Gerlach’s assignment was to encourage the mighty Icelanders to join the Nazis in the pursuit of racial purity and domination of inferior peoples. Gerlach, who was a respected physician and a long-term member of the Nazi Party, did not find any of the spiritual treasures promised by his commanders. Instead he only saw what he describes as a pathetic behaviour of savage and corrupted degenerates. We know this because his memos on Icelanders have survived and are stored at the National Archives of Iceland. Werner Gerlach was released as a prisoner of war in 1941 in an exchange of Allied diplomats. He died in 1963. The Allies maintained control over Iceland until the end of the Second World War, denying Germany a chance to seize this “racially” and strategically important island west of Europe.
Telling Quotes From His Memos:
“It’s nothing short of arrogance, that these 117.000 souls, one third of them degenerate weaklings, should desire to be an independent state. Add to that that the cultural level is as not high as they say.”
“Icelanders are a great disappointment. The upbringing of children is pathetic. Schools are beyond the pale. The only school considered remotely acceptable is the Catholic school. In the others, the children learn only to argue. Lack of discipline. The director of educational affairs is a communist. The youth has no longer any idea of the sagas or Iceland’s history, no sense of family or race.”
“We need to reconsider our position on Iceland completely. We need to have scientists do what can be done, but other than that, this grovelling, which meets no kindness, must stop. Modern Icelanders do not deserve us, neither for their temperament, nor their significance, with the exception of a few.”
“Earlier than ten in the morning, there is no possibility of waking anyone, and women not earlier than 12. Men work irregularly. Unemployment. Men do not use their energy for working, but rather to not go to the dogs. Everything, which for us is unimportant, becomes a goal for them (swimming, table tennis). All Germans, that have stayed here long, are not all there, or are apathetic and dumb.”
“Films are almost exclusively American spy films of the lowest sort. The theatre company performs Sherlock Holmes for a whole month. Here, the dramatic subjects from the sagas lie untouched in the gutter.”
“The theatre company performs a German farce by the Jewish pornographers Arnold and Bach. The police banned the play because of its corrupting influence. Then they stage another premiere in front a full house, where a committee of experts and members of parliament are given access and it’s sold out. The press goes mad. Overwhelming enthusiasm and applause.”
“Musical life is of a very low standard here. There are one or two quite good painters, but there is a lot of pretence and junk. Sculpture – Einar Jónsson is half-mad but very Icelandic. Then there’s Ásmundur Jónsson, who is called a cosmopolitan. Clearly Jewish degenerate art. A book has been published on him.”
“Views on Jews – completely uncomprehending. An Icelandic student was asked by his fellows, when discussing the Jewish matters: “Would you marry a Jewish woman?” And he answered: “Yes, why not?” Even the director of the national museum will hand an ashtray to a negro in a red coat.”
“The Icelandic press is more British than the Times. When the Times confesses that the English have been forced to retreat, Vísir publishes the tall tales of the United Press about Allied victories. And then there is the foreign minister’s english-minded rag. You cannot point out enough that the Icelandic newspapers are fifth-rate English country rags.”
“Constant inconvenience day and night from crazy or drunk men – or both. All night, eleven o’clock, twelve, two, drunken Icelanders call and demand to talk with me. Awful alcohol abuse. Black death. Spirits. Alcohol and taxis. Drunken men out in the street. Smuggling.”
“No car tires to be found. Most cars are old, purchased from abroad. Fewer visitors to the swimming pool. No external stimulation. Men lose all standards. No fruits. We were going to buy a bed, in Reykjavík there were only two available. We were going to buy a sink, sinks have been unavailable for three weeks.”
“One thing is certain and must be clearly stated – there is nothing left of the noble nation and its pride, but servility, lack of decency, toadying and humiliation.”
Posted by vikingamma at 1:48 PM 1 comment: