WHAT ARE THESE CREATURES? 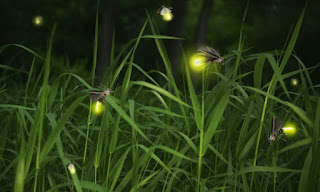 
After an eleven-day, arduous journey from my country, Iceland, I arrived in Normal, Illinois, USA
Mary's (my new mother-in -law) house was a small, one-story, white painted home in a row of other similar
homes in an older neighborhood. That evening I stood in the yard and looked around familiarizing  myself with my new surroundings.
Across the street from Mary's house was a church. I was looking at the building and thinking how strange it was - almost middle of June and very dark outside. I was used to seeing part of the sun all night at mid-summer. Then I saw these little sparks! The church must be on fire!
I ran inside and tugged at Mary's dress.
"Hey, you, kirkjan (church) fire, fire!" I stuttered. Still not used to saying Mary, or Mom, I often called her 'hey you'. I pulled her to the front door and pointed. The sparks were even thicker that before and coming dangerously close to us!
"Fire?" She stared out and then looked at me, puzzled."Where? I don't see any fire." She cocked her head at me, trying to understand my fear.
Frantically I pointed. "See there, there!" I was twenty and acting like a six-year-old.
Turned out this was my first encounter with fireflies.Bugs with their own lights! Startling, and scary, I thought as I watched these little sparks land in grass and bushes, and not starting any fire. Mary had quite a time in educating me.

Suddenly I'm awake. I started to get up and glanced at the white sheers at the window where glimmer of sunlight was filtering through. I stared at the weird shape; PALM-OF-MY-HAND-SIZE, BLACK BLOB..Then frantically shook my husband, Del, and whispered "what is that thing clinging to the curtain?"
Both of us stared for a moment. "I can't make it out." Del said
"I'm scared." I eased my feet to the floor.
"Get a towel or something, and I'll grab it." Del bravely offered.
The THING hadn't moved so I crept closer o the window, IT didn't move. Frightened beyond belief I crept closer and peered at the creature.
"It has a face and pointy ears like a mouse, but THIS has wings!" I gasped in unbelief as I backed away. 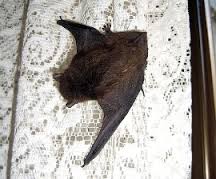 "GET A TOWEL,I'LL GET THIS THING." Del started to get up
" I'm scared." I whined. "What if you miss, what if IT takes off? It looks hideous!" I was now frantic with all the awful possibilities racing through my head. "What if IT has a family in here? Surely IT didn't hatch all by itself, maybe there are bunch more and come to look for this one, THEN WHAT???!!!"
"JUST GET A TOWEL!!!" Del raised his voice.
I got the towel. Del grabbed, and wrapped the THING in the towel without any trouble. The THING didn't protest as I put IT into a plastic bag, towel and all, then tied a firm knot. Put it into another plastic bag and firmly tied a solid knot. There the bag awaited for us to take it somewhere for the CREATURE to be identified.

We were dressed and had breakfast then, with hands on my hips, I demanded of my hero. "Now what? We got a horrendous creature in the bag...do we call the fire department? The terminator? The firing squad?" I wanted this THING out of my house, like RIGHT NOW!!
Del held up his hand "Let me think... Okay, let's drive over to the zoo and see if there's someone who can identify it."
I fortified myself with six cups of coffee and gingerly picked up the bag, all was quiet inside. I felt remorse:God had created IT and I just couldn't let IT suffocate.I picked up a toothpick, holding my breath, thinking IT might just explode out of the bag. But everything was suspiciously quiet as I made few holes.

The Zoo was a madhouse, school buses and kids everywhere. No place to park. Del had to stay in the car while I went for help.
"You mean you have IT in that bag?" The guard exclaimed after I related the episode
"Yes."' I nodded.
"I'll call someone from the animal house, please wait outside" She pointed to the door. I stepped out, bag firmly in hand, and sat down on a bench.Pretty soon a burly individual swaggered up to me and asked.
"So, what do you have in there?" I proceeded to explain.
"Hmm, sounds like a flying squirrel." I felt better, a squirrel doesn't sound so bad. The man pursed his lips.
"How did you get it in there?"
"My husband grabbed it with a towel, so it's all wrapped up in it, and then I put it all into the plastic bags"
"Wait here while I take this over to that tree." Taking the bag out of my hand he opened it up against the tree-trunk and shook the towel. He cocked his head and studied the THING for a moment then wadded up the towel in the bags.
"It's a bat, and still alive. I will throw all of  this away." Indicating to the towel and bags.
"Yikes! I sure don't want it! How in the world did a bat get into my house? Do I have to worry about more of them, a mom, a dad, a brother or a sister?" I must have looked a little nuts. I think my English went north for a minute.
The burly guy laughed."I don't think so, this one probably came through an open door and couldn't find its way back out." As I profusely thanked him, he continued. "It only eats insects!" He chuckled, reading my mind. Somewhere I've read that bats suck the blood out of humans!

Posted by vikingamma at 5:41 PM No comments: