"You're going to do what? You're still driving!?" My two sisters exclaimed.
"You're ninety-two, you can't be doing that!" Some in my family were quite concerned.
"Let someone else drive your car." Suggested another.

But I was going to drive my car around while in Texas, so why would I not drive it
south? Besides I had passed my driver's test with compliments from the examiner!

Heidi, my youngest child had her car loaded and also my Honda. We were leaving  Central Illinois  and heading for north Texas where she had rented a house by a huge lake, Texoma, that separates Oklahoma and Texas.We would not be back until March and had to think of all the clothing we would be needing; some for church, some for warm weather and some for a little chilly days, it gets down into the thirties but warms up splendidly during the days.

I had Dusty with me, she is a very well behaved Snoodle and good company. Heidi had Dusty's boy, Thor, who is as cute as can be and knows it, but also rambunctious, and would it be harder for me to him still.
Heidi led the way and I followed. It was a good drive, the weather was nice and folks were driving sensibly.
Dusty snoozed on her comfy pillow on the passenger seat. We stopped at rest-stops for the two dogs, and ourselves, to stretch and walk around.

After a few hours of very pleasant drive through the rolling hills of Missouri we stopped in Springfield, MO. for the night. I have to admit to certain sense of satisfaction when next morning I saw the weather report for Illinois;  Snow and sub-zero weather on the way... I was getting out just in time :-)
Next morning  we got up and after breakfast started driving the last few hours of the - just under 800 miles - to the lake property.

Here I was; looking at the 76 Christmas stockings we had hung on the tree-limbs outside...Sitting  in a huge glider "just a swinging away" in 71 degrees and sunshine! I know it will dip down but not minus zero! 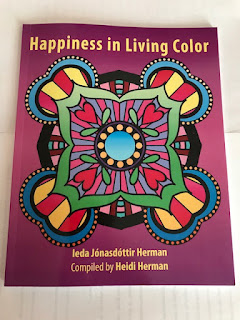 Today I'd like to share with you couple of  up-beat quotes from my "Happiness In Living Color" inspirational coloring book for adults:

My Doctor told me I needed more greens in my diet. On the way home I stopped and bought my favorite candy-coated chocolate. Thank goodness there were green ones in there!

Another Doctor told me Muscatine grapes were good for me. So I bought the convenient liquid form.

Who am I to question the doctors?

"We can't live like chicken in a coop and expect to be able to soar like the Seagulls"!

When I was ten-years old and growing up in Iceland I tried to fly like a Seagull by tying a flour-sack on my neck and climbing on top of a shed. An earthquake spoiled that attempt, but when I was 88 I went paragliding in the mountains of Utah and again when 90, I got to paraglide in Iceland...

The thoughts and motivational ideas in my "Happiness in Living Color" are my foundation for a happy life. May they inspire you as well.

I aspire to inspire, before I expire.


Posted by vikingamma at 8:52 AM No comments: